When it comes to microbrand watch companies we see watch designs that probably would never go into production if they were made by the big brands like Seiko, Omega etc. And that is why I love microbrands as they offer cool designs, interesting ideas how to read time for affordable prices. And today we have a watch that is pretty cool and doesn’t cost that much. And this particular watch design has been recognized by two international design awards: Red Dot Design Concept and A’Design Award. The watch we are looking at today is called simply the L1 and it is from a new company called Loyto. As I understand the brand is from Spain and the watches are made there, which was very surprising for me (on the case back it has a “Made in Spain” engraving).

The L1 came in a nice rectangular box, inside the box you will get the watch and instructions manual with warranty. Nothing special, but it is done in style just like the watch itself. The first impressions were good. The watch has a nice weight where it doesn’t feel cheap. I just don’t like light watches, of course, if they aren’t made just for that purpose like titanium watches. I also really like this round, lugless look and the dial also is very interesting to look at. Loyto actually offers the L1 in two colors, in white and the one we have here which is in black. 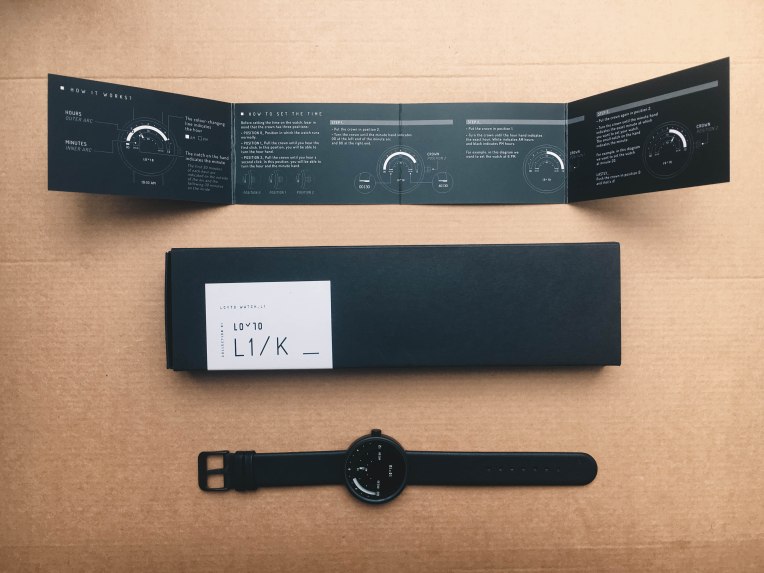 So the case of L1 is made of 316L stainless steel. The case has been sandblasted and covered in black PVD finishing. The case is very well made, no problems there. The finishing is also done quite good. The case shape is round and it has that lugless look. The place where you put your strap is hidden underneath the case. And this style of the case has been used since the 60s, I even have a Raketa, Russian world time watch with the same case style from the 70s. The case diameter is 40mm all around and the thickness is 9,5mm. Lug width is 20mm. The size is very good and it actually wears more like a 38mm watch due to those non-existing lugs. At 3 o’clock we have a very nicely sized push-pull crown. The solid screwback case back is also finished in the black PVD finishing. On the case back you will find engravings of some specifications and other stuff. The watch is rated at 5ATM (50m) water resistance. So I wouldn’t go swimming with it, yes it will withstand a short time in the water, light rain, handwash, but that’s it, better leave that for a diver. On top of the watch sits a flat sapphire crystal. 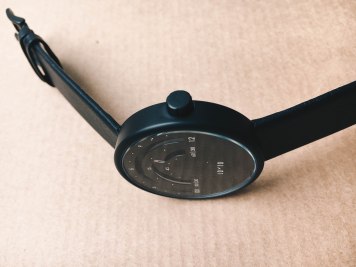 The dial is something very cool. It has that almost jump hour look. So let’s start with how you read the time? The top arc has 0 to 12 hour indices and the inner rotating disc has two colors. The white color is for AM and the black for the PM and the line that separates them is which indicates the correct time in hours. The second arc has 0-30 indices on top and 30-60 indices on the bottom. So how o you tell the minutes? Well now we have a minute hand, or I should say minute hands. The notch on the minute hand indicates the minutes. So the first 30 minutes of each hour is indicated on the outside of the ar and the following 30 minutes on the inside. So there are two hands that rotate around, one hand has the notch on the top and second on the bottom. Actually, I discovered this just recently that the first position of the crown controls the outer arc (hours) and the second one controls the inside arc (minutes). But with the second crown position, you can set time for both arcs. The dial itself is black with white details. The Loyto logo is on the bottom of the dial. Yes, the time telling is hard to get used to, at least for me as almost all my watches have the traditional dial layout, but after a week of using it, I could tell time in a glance. 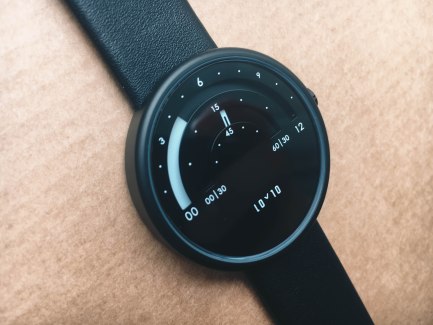 Inside the L1 ticks a Swiss Part Ronda 505.24H movement. I had this movement in a couple of other watches that had been in for a review and they all were precise on point. There isn’t actually much to say about it, as it is a Swiss Made quartz movement and the synonyms with that are quality and precision. The battery life is about 2-3 years. The strap that came with the watch was just a plain black genuine leather strap. The strap is very supple so it will wear pretty well on your wrist. The signed tang-style buckle is also made from stainless steel with the same black PVD finishing.

Overall the Loyto L1 is a pretty cool watch. I have gotten a lot of compliments from my watch geeks when they saw this one on my wrist and they were really surprised to discover that it was Made in Spain. So what do you get for a 205,79€? Well, you get a very well built watch which is made in Spain. You also get a sapphire glass, a cool design which was recognized by big awards and a Swiss made movement.