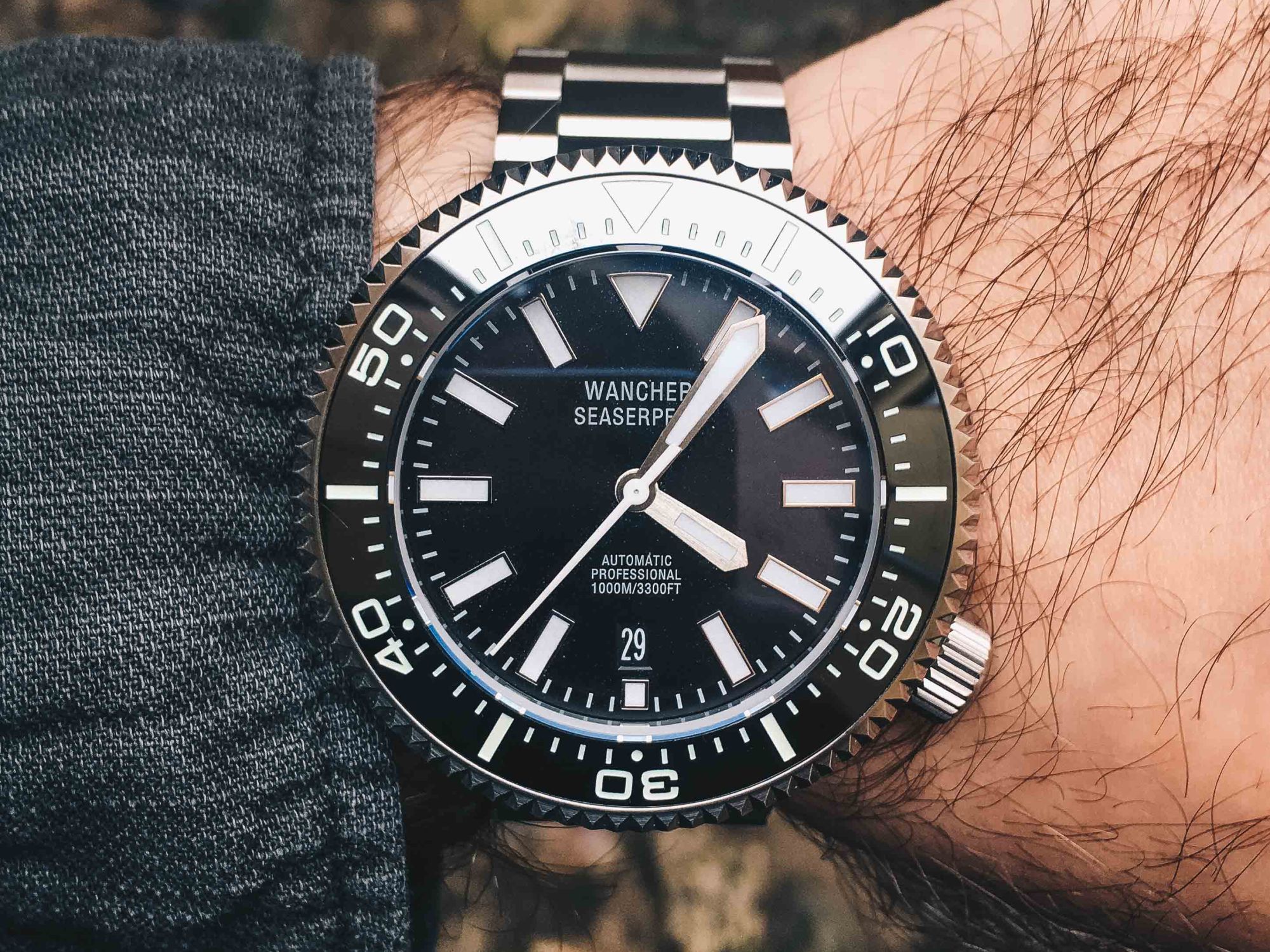 Since I wrote a review about the Wancher Storm Jet, you have been asking me to review more of their watches and so finally they sent me two new watches! One of them is called Seaserpent and the other…well let’s keep that a secret for now. I won’t go much into the company, they are basically based in Japan, their main business is making fountain pens, but they also are making watches.

So the Seaserpent is one of those “puck” watches that I have been seeing more and more lately. I know Halios were the first to come out with this Puck shape and some watch people have fallen in love with that shape that Halios made and many companies caught that, like Steeldive and many others and started making these. Wancher’s variant comes only in one colourway, but I wish they made a blue one too.

The Seaserpent came in a small wooden box, which actually is kind of disappointing for a 720euro watch. The first impressions are nice, but when I looked more into the watch, the bezel action is really bad, it is way to easy to turn. The crown is good, but for the water-resistance it is poorly made as it doesn’t go right to the case, but it has a slight gap between case and crown. And the bracelet has stamped clasp and quite poorly finished links. But otherwise, the watch is nice. The sunray black dial, the blue superluminova which glows quite bright for a long time. But overall I wasn’t impressed by the watch, but I gave it a spin anyway.

The case of the Seaserpent is made of 316L stainless steel. The case is actually very well made with nice sharp lines. The satin-brushed finishing is also very nicely done. The diameter of the case is 46mm, the thickness is 15,5mm and the lug width is 22mm. On the paper, it sounds big, but in reality, it wears more like a 42mm to 43mm watch due to those none existing lugs as it has this puck shape. At 4 o’clock we have a screw-down crown, it is big and very easy to operate. Although between the crown and case there is a significant gap which shouldn’t be there, especially on a 700+ euro watch. At 9 o’clock we have an automatic helium escape valve. The 120 click uni-directional bezel with ceramic bezel insert with superluminova is actually the weakest point of this watch. I don’t know if the bezel on this one is broken or it comes like this. But the bezel action is really bad, it turns too easily and also you can push it down and then it turns like it should. I think it was one of those pushdown bezels where you can turn it only when pushed down, but here we have a broken mechanism under the bezel I think. Nonetheless, the bezel is made really good and the ceramic insert is really nice too. The solid screw-in case back has Wancher logo and specifications engraved on it. On top of the watch, we have a light domes sapphire crystal. The water resistance is 1000m (100ATM), at least that is what Wancher is claiming it can handle. In my opinion, it can handle less, but still, I think it is very much safe for swimming or any other water activity.

The dial is sunray black. The applied hour markers have polished edges and are filled with blue Superluminova. Around the dial, we have a printed minute track. At 12 o’clock is the Wancher company name and the model name “Seaserpent“. At 6 o’clock there is writing “Automatic, Professional and 1000m/3300ft”. Under the writing at 6 o’clock, we have a date window with a matching colour date wheel. The sword-shaped hour and minute hands are brushed with blue superluminova in the middle. The second’s hand is white. Overall the dial is actually really nice although the Wancher and Seaserpent text looks quite cheap. But nonetheless, the dial is very legible and the lume in the night shines very bright and for about 3-4 hours which is a lot.

The movement that is inside the watch is Japan made Seiko NH35, which is running at very badly, mine example is running at +30 to +33 seconds a day which is way too much. Usually, these movements run at +5 up to +17 seconds a day max, but this is just very poor quality control in my opinion. Anycase this movement is pretty popular in the microbrand world as 50% of watches that are coming out have this movement inside them. It has proven it’s reliability and easiness to service within many years. You just can’t go wrong with Japan made movements from Seiko. It is an automatic 24 jewel movement with 41-hour power reserve and beating away with 21,600 BPH.

The bracelet on the watch isn’t that bad. The links are solid and it does what it was built for. But the links are held on with pins, not screws, most of the watches that I’ve had in for review that cost more than 400euros had screw links. Also, the clasp is stamped, even watches that cost half as much has milled clasps! The finishing on the links also isn’t good, the polished sides have scratches right out of the factory and the brushed finishing on top is quite rough in some spots.

Overall the watch is cool looking, but they should fix the issues in their QC as the bezel is either broken or needs complete rework as the system isn’t working. The finishing on the case, bracelet and clasp need to be better. Actually, this was kind of a disappointment rather than a watch. The last Wancher that I reviewed was the Storm Jet and it had some very small problems, but they were small, on this watch, the problems are on almost any part you look at. Is it worth 700euros? No, in my opinion, it is worth only 200 to maybe 300euros, but there are much better watches even in that range! This one I would skip!

Automatic with mechanical self winding capacity

Made in Switzerland.
Superluminova on hands and indexes.