I was looking through the micro brand thread on Watchuseek forum when I stumbled upon one post where this guy was introducing people to his new watch company and watch. Many of the guys were harsh on the design because it looked like a mix of racing/diver/aviation watch and that it didn’t have personality, but for me, the design looks cool. I like to wear rally straps on all of my watches (dress or diver, it doesn’t matter) and the slide rule bezel is a really neat thing and I never had it on any of my watches. In my opinion, this watch stands out of the usual diver style watches that most of the micro brands make. This is something different and I like it! So I contacted the owner and after a week the watch got here.

So the Havaan Tuvali watch company was founded by Eric Yeh. The name, Havaan Tuvali was originated from the Taiwanese aboriginal Burun tribe language meaning “The deer’s sunset”. The ancient Burun people believed that at suns down, when the deer came out from the forest to browse for food and water, that’s the time for the people to finish up their day of work, in some ways, it is also how the Burun people tell time. The first watch Eric wanted to design was Diver’s watch, so he went on a trip to find inspiration. So he came across an Aviation Museum and saw the model of the first amphibious airplane used by Taiwan military and later used for commercial flights, it’s a PBY-5A Catalina. So that’s where the sub dial for seconds come from and also the diver look with the slide rule bezel also reflects on the plane, as it was the first amphibious airplane. Only 200 were made, Eric doesn’t want to keep making the same model over and over again, there’s no fun in that. He also wants to make quality watches for good prices.

Where do you like Havaan Tuvali to be in 5 years from now?

“Hopefully still making watches, haha… I like Havaan Tuvali to be a premiummicro brand, but still offering watches at cheap, affordable price. I hope to add onenew model each year, quantity will be kept no more than 300 for each model and in5 years, to have a lineup of Pilot’s, Diver’s, and Race watch.”

So the watch arrived in this super nice wooden box. The box alone looks like it belongs to a watch that costs 3 times more than the Squadron One. So the box is made from wood, it is signed with Havaan Tuvali logo. You open the box and here is the watch and accessories. So in the box, you get a watch, strap removal tool, stainless steel bracelet, warranty card, manual, cleaning cloth and some extra spring bars.

So the case is shaped in this cushion style. As we know it is basically a Panerai style case. I like these type of cases. But not everyone executes these right. And I think this one was done fairly good. The case is made from 316L stainless steel. The diameter of the case is 44mm, the thickness is 14,7mm, lug to lug is 51,9mm and the lug width is 22mm. So the watch case is big, but you need to remember that it is water resistant to 450 meters. That is pretty impressive because the watch has a see-through case back. And not everyone can achieve this. Of course, the watch probably could withstand much more than 450m if they didn’t make it a see-through case back, but I like that they did. I like looking at the movement, always remember as a small kid looking at watch movements for hours. The watch has brushed and polished finishing. The case has brushed finish, but the lugs and the upper sides of the case are polished. Finishing is done really good The crown is on 2 o’clock. I think that it is an odd placement and maybe the crown is a bit small for such masculine watch. The crown is signed with a small aeroplane. We also have a slide rule bezel. The bezel is rotating both ways and you can measure with it probably everything you can imagine. This is actually the first time I have slide rule bezel on a watch. I tried to learn how to measure with it but failed miserably. The inner circle doesn’t move, but only outside ring moves. The inside ring is in brushed stainless steel finish and the outer ring has metal bezel insert in blue colour. I think the blue colour should be brushed, then it would be easier to measure in sunlight. The bezel is easy to grab and rotate, and it is much stiffer than the free rotating bezel on Vostok. 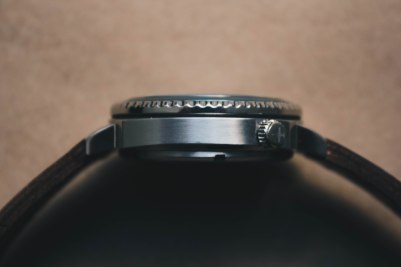 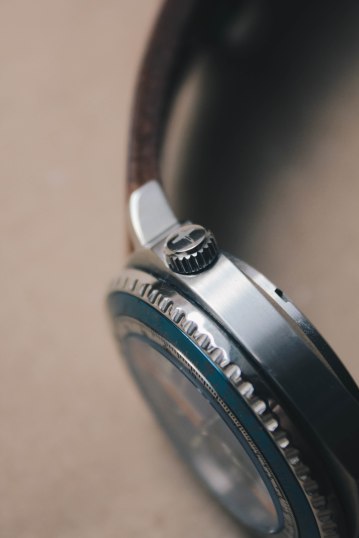 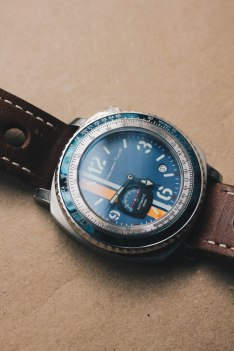 On the dial, there is also much going on. Seems that the watch has many design cues from many watches and styles. The dial is in blue colour with vertical stripes going over the dial in orange and white colour. The numbers and hour markers are applied with C3 lume. The lume isn’t the best and lasts about 3-4hours. On 16:30 we have a round date window. Between 8 and 9 o’clock we have a sub dial that was inspired by the airplane cockpit. I think the idea is very good but executed a bit strangely. We see the seconds hand only for 30sec, the other 30sec it is hidden. I think the second’s hand should be seen all the time, as the watch is aviation inspired and the second’s hand is very needed for the timing. Do I like the dial? Well, I don’t like the vertical stripes, I think the watch looks cheap. If there wouldn’t be any stripes, the subdial would be more open so we could see the whole 60sec, then the dial and the watch would look much better.

The movement is a very odd choice for a microbrand, but I think a very good one. The movement choice that Eric went with is Sellita SW290-1 automatic movement. The Swiss Sellita movement beats at 28800 A/h (4 Hz) frequency and has a decent 38 hours power reserve. My timing of the Squadron One came out to be +\- 15 seconds per day. I like that there was some added detail to the movement as well. The self-winding rotor is decorated with Havaan Tuvali name and logo. Another nice touch I like to see. So why I think this is a better option than Miyota, Seiko or ETA? Because everyone uses them, and Eric went with some Swiss quality and with something different. Not that ETA is bad or anything, they just don’t supply movements to everyone. Overall a very good choice for a watch that wants to be different. 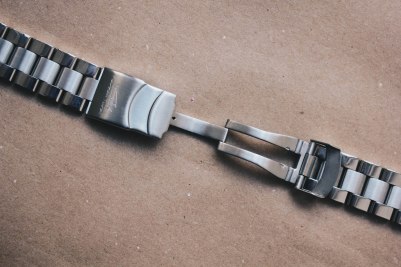 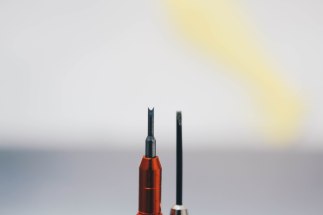 So the watch came with a leather strap and a stainless steel bracelet, they also included strap removal tool and flat head screwdriver to remove the links on the bracelet. So let’s start with the strap. The rally strap is made from a very thick brown genuine leather. It has white stitching going around and it is done really good. The buckle is also stainless steel and made in this Panerai style. On the buckle, they also engraved the “Havaan Tuvali” logo. The bracelet is good quality polished outer links and the inner links are brushed. The only complaint here would be that it hasn’t got any solid end links. I know that this is a solid turn off for many watch geeks, but you need to remember that solid end links make the watch wear a lot bigger and with this bracelet, it wears a lot smaller. The links are attached with screws instead of pins, which is a good sign. It makes resizing the strap super easy and fast job. The clasp is machined and does its job well, I wouldn’t call it, of course, the best of clasps, but stands in the same range as the Seiko ones. Overall both the strap and bracelet are made very good. The bracelet has no cheap rattle and everything seems solid, the same can be said about the strap. 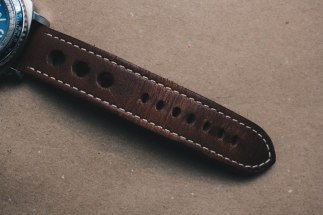 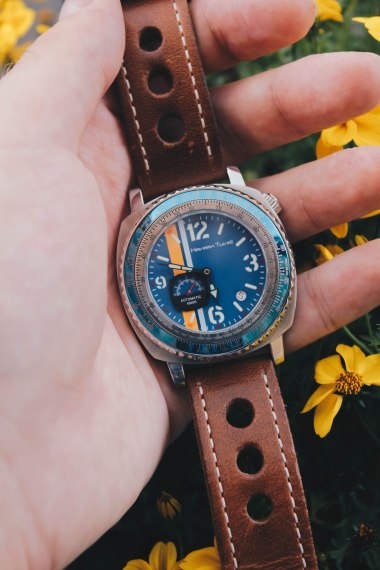 Overall the watch is great, the idea and everything, but they should improve the design to more subtle look. But yeah Eric has done a great job on the watch. I like that they went with different movement. The see through case back on a watch that can go 450m deep, those are really impressive numbers for something like that. Do I recommend it, well.. if you are a person who likes something out of the box then take it if you like something more subtle then look another way. Anyways, this is a steal at 399$