Today we are gonna talk about a watch that was featured on Hodinkee two times. Yes, rarely I got to review a watch that was even featured once or mentioned on Hodinkee, haha. As usually, they are out of my price range and no one actually wants me to lend a luxury watch for a review. But this one is  But I will get there soon, my goal is to get my hands on and review at least 10 luxury watches this year, or at least try to review a couple of them. But ok, we are going off topic, we are here to take a look at a brand called Merci, which probably out of Paris haven’t been heard.

I first learned about Merci from the Friday Live video series that Hodinkee makes. Cara was wearing it and they said some good words about the watch and company. Jack also said he has done an article about these watches, and so I went on to Hodinkee to learn more about the brand, and just when I saw the watch, I liked it a lot. And so I wanted to review one. Immediately I wrote to Merci and they sent me one for a review.

Merci is a store in France, Paris on the Boulevard Beaumarchais which was originally founded with two goals in mind. The first was to provide a kind of starting point for new and designers, and the second was to support educational projects in Madagascar. Merci’s first watch design, the LMM-01 (LMM stands for La Montre Merci) is their take on a simple, very affordable watch that nonetheless has a number of carefully curated design cues and of course the superb quality of a Swiss Made watch.

LMM-01 comes in two versions: a quartz model, which houses a Ronda 513 movement with about a 45-month running time between battery changes, and a hand-wound mechanical version, which uses an ETA 2801-2 caliber. Also, there are 2 dial options (white, black). Everything else specifications wise is the same. Pricing has been kept extremely affordable, the quartz model is €230, while the mechanical model is €399.

Before I review I have to mention that while writing this review of the LMM-01 there has been interesting news for the Merci. Last month (October 2018) French President Emmanuel Macron has been spotted on several occasions wearing the LMM-01 mechanical version of this watch with white dial and brown strap from Merci. This is really big in my opinion and great to see that Merci get’s such a recognition. Knowing that even a very busy person like him can make time for the act of winding a watch made Merci very proud, as they informed me. Here is Emmanuel Macron with the LMM-01 on his wrist: 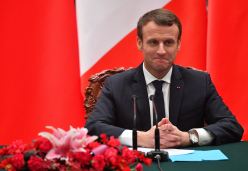 So let’s get to the review. When I courier delivered the package I was really surprised to see a very big parcel, it looked like it could fit 100 boxes of Merci watches, but it was very light. At first, I thought it was some kind of mistake or something, but when I opened the parcel I found that there was a reason why it was so big. Inside there was a brown paper bag with the box and catalogue inside. So they gave me the experience of that I just came out of their store in Paris. Which is pretty good attention to details n my opinion and in general how the customer will feel. I don’t know if they treat every customer that buys their watch or I’m just that one special guy, but anyway it was a nice touch. The watch box is very small, made from cardboard stapled together. From what I see it is meant to be eco-friendly. Inside you will find some instructions, warranty, a cool looking cotton cloth for cleaning the watch and 60 cards with text on them (specifications and other stuff, but it all is in French). The first impressions were good. I like the field watch inspired looks and the design overall looked really nice. And I already noticed the versatility. You can put it on a nato to look like sports watch and when you put a nice dark brown leather you can dress it up. And that hand-wound movement, just wow. There has been a long time since I got a hand-wound watch in for a review, mostly everything is either automatic or quartz. 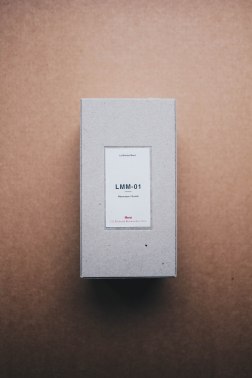 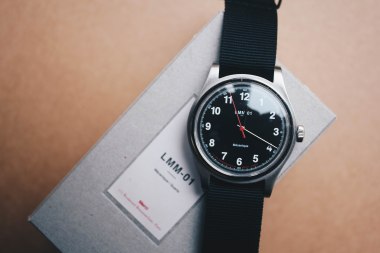 The case is made of 316L stainless steel. The case has a round shape. The watch has what is called a step case. The case itself is brushed but on top of that, you will have a polished step. The brushing is very nice on the watch and I like that subtle polished step, you almost hardly notice it. The step case is inspired by the military watches of the first half of 20th century. And I really can see the resemblance. I like how the main case is flat and only the ends of the lugs kind of bend down, it makes the watch wear a bit larger as the diameter is only 37,5mm. But it wears like 39mm easy. On the wrist, the watch sits very nice as due to hand wound movement it is pretty slim, only 11mm (3,7mm of that is the thick crystal). From lug to lug it measures at 47,3mm and lug width is strange 19mm. I think the only flaw with this watch will probably be the lug width. I hate when companies make the lug width in the unusual widths. Of course, you can see some of the weird lug widths on many Omegas and many other famous brands do this too. But the reason why I don’t like the 19mm is that it is hard to find straps at that width, at least not the ones I like. I just don’t get why they could not choose the 20mm or 18mm lug width, as it would be much easier for people to buy straps. But it has a good feature that I think many tool watches don’t have these days, and those are drilled lugs. It just makes the strap changing much easier and less risky. As sometimes you can scratch the back side of the watch if you aren’t careful when you take out the springs bars the classic way. At 3 we have a push-pull crown that is polished. The crown is unsigned and pretty basic but does it’s job very well, it is easy to grab, set time and wind the movement. Case back is a screw in with some writings like: Swiss made, production number and Merci logo and address. On top of the case sits a vintage-inspired acrylic (plastic) crystal, and this time I don’t mind. Usually, I rant about why there isn’t a sapphire glass, but the acrylic crystal just suits this watch and the sapphire would ruin the vintage styling and make the watch more expensive. The watch is rated at respectable 5ATM. I usually don’t recommend wearing a watch with no screw down crown and only rating of 5ATM in water, but this one is built just so good that I think you can easily wear it for a short swim. I really like the vintage styling of the watch, I’m a big fan of vintage stuff so I appreciate a nice vintage design in a modern watch.

The dial. There might be not so many things going on, but the thought process that went into designing the dial is more than you expect from a fairly small company. The dial is black. Around the dial, you have a minute track with numbers of the minutes each 5min from 5-60. The white hour markers are white Arabic numerals from 1-12. At 12 o’clock we have an “LMM-01” and at 6 o’clock also in white, there is “Mecanique” (Mechanical in French) written on the dial. Also at 6, closer to minute track, we have a red writing with the address of the store. The uncluttered dial uses a combination of fonts: Helvetica for the hours, and AT Sacker for the minute’s track. Whats so special about the fonts? Helvetica’s history is well known (it was developed in 1957 by Swiss typeface designer Max Miedinger) but AT Sacker is a little less known unless you’re a typography freak. The name actually refers to a group of typefaces developed in the 1970s by a stationery engraver named Garrett “Gary” Sacker, and the one used in the LMM-01 watch looks like Sacker Gothic, which in turn resembles, coincidentally, many of the custom typefaces created for vintage mechanical watches in the pre-quartz era. The hour and minute hand’s are the same. They are polished and has a taper to them towards the end of the hand. The second’s hand is a very thin red hand which also tapers towards the end. I really like the dial, it is simple, but a lot of thought went into details. The time reading is also pretty easy. 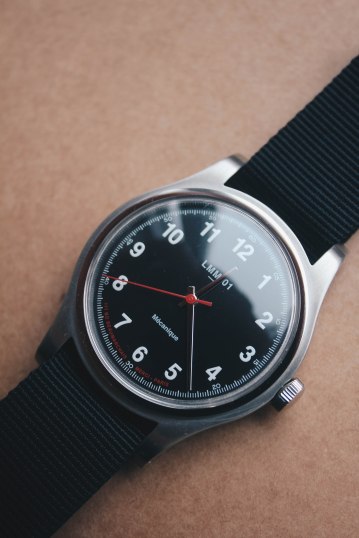 The LMM-01 features ETA 2801-2 calibre. It is a hand wound, 17 jewel movement. The power reserve is around 42 hours. It does 28.800 vibrations per hour at 4 Hz. This movement is really good, and I actually can’t understand why almost no one uses it in modern affordable watches. The precision is really good. I’ve been getting around +3 to +4 seconds a day. The only watches that I’ve seen with this movement were from Stowa, MeisterSinger, Marathon and only couple of other modern microbrands. Most companies tend to choose the automatic ETA’s or even Japan made Seiko or Miyota movements as they are cheaper I guess and easier to acquire. But I actually like the hand wound movements better, the automatic’s are great, but with hand wound movements, you just get that interaction/connection with the watch. 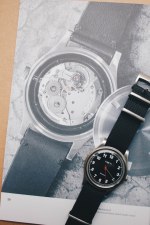 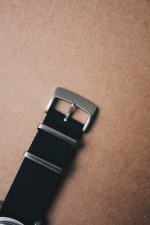 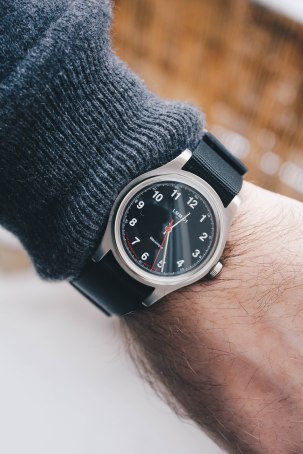 Nato strap that came with the watch is also pretty good. Merci also sells some perlon, leather straps for this watch too which are very well made too. The strap width is 19mm. The quality and stitching is also pretty good, it can’t compete of course with BluShark or Phenomenato nato straps, but it is pretty good for what it is. Hardware is brushed, the loops are just regular ones, but the buckle is slightly different than regular natos have. It is a bit better looking one. The strap is held on with quick release spring bars. As you know all already knew, I like them a lot and I think every watch company need’s to use them, not only the affordable watch companies but also such big players like Omega, Zenith, Tag Heuer and others. 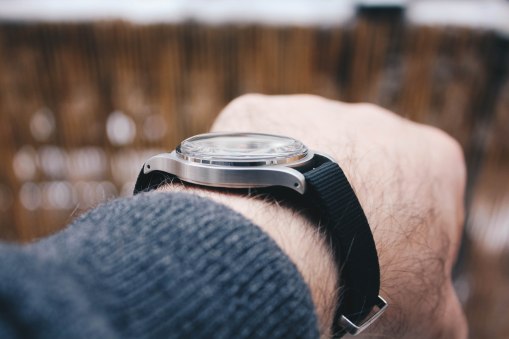 Overall the LMM-01 is a great watch! The first day I got it, I loved it. I wore it for one week straight. It was just what I needed that week. It is small, wears comfortably with that small size and nato strap, looks good and of course has that nice hand wound movement. Overall the watch is really great! The only thing that I don’t like is the 19mm lug width, but if you can overcome that, I think you are in for a treat!

LMM-01 mechanical is equipped with a Swiss-made ETA 2801-2 movement, ensuring up to 42 hours of autonomy. LMM01 should be wound up daily The “Swiss – Made” label guarantees the quality of its construction and components. 37,5 mm case. Water resistance up to 50 meters/160 feet