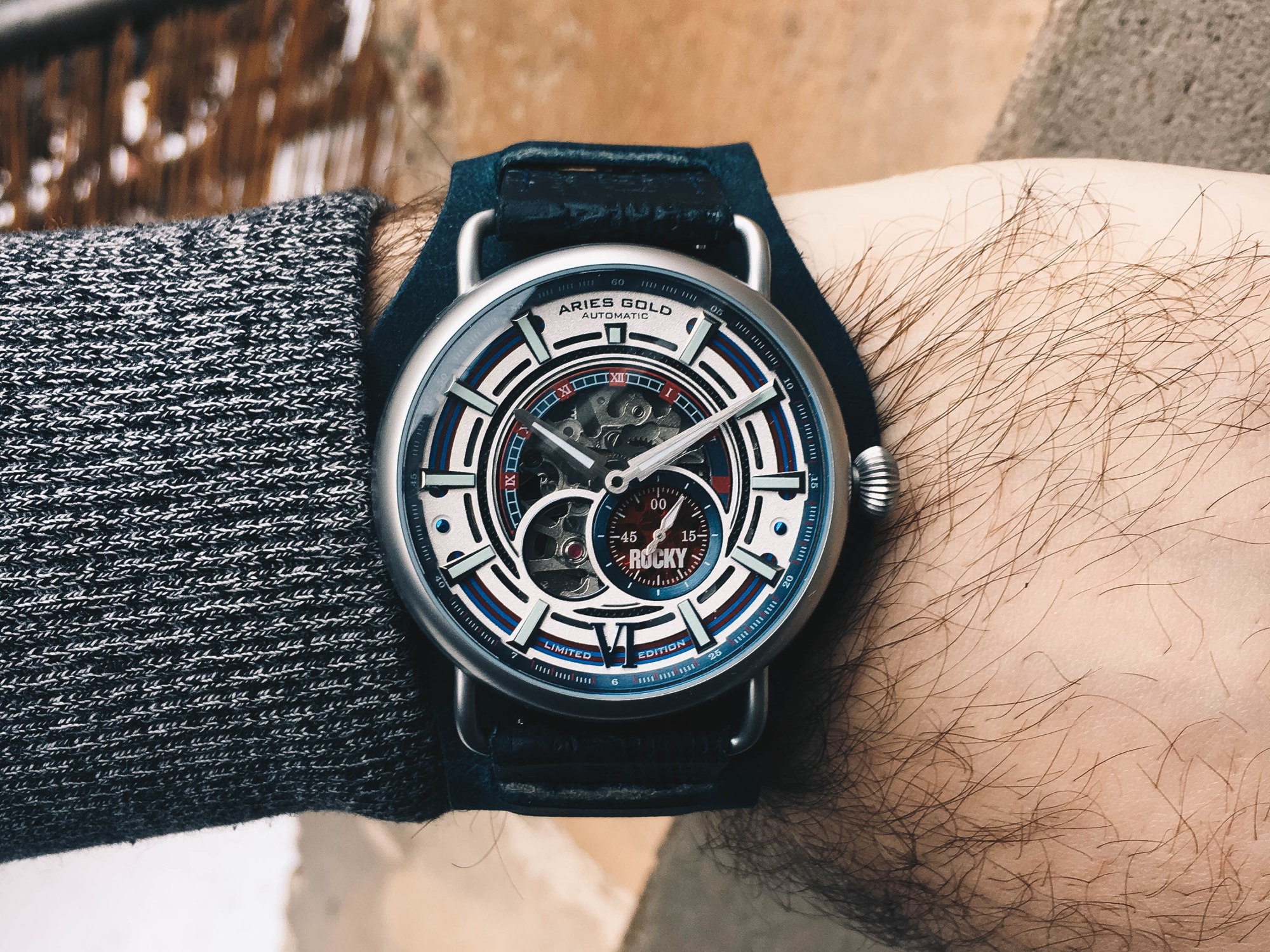 Usually when it comes to movie-inspired things like watches, toys, posters.. basically memorabilia I don’t like it. I don’t like when many companies take advantage of the hype over any movie and make things you can buy. But sometimes they do get it right. Today we are gonna take a look at a Rocky movie inspired watch from a company called Aries Gold. Rocky, especially the first movie is one of my favourite films and definitely goes into my top 10 movie list. The story behind the movie, how it was made, how Sylvester Stallone struggled and I also have to mention that in the production of this movie the steadicam was invented there right on the set, because it was very hard filming all the running scenes (steadicam is now a movie industry standard and is used by professionals all over the world).

Any case, back to the watch. At first, I contacted Aries Gold about a different watch (they actually sent me that one too, so a review for that is coming soon too), but they also offered me this one and the first time when I saw it, I really liked it so I agreed to this one too and I’m happy that they offered as this one is cool looking watch!

The company Aries Gold actually is a pretty old brand, I actually thought that this was a new brand, but they actually were established in 1970. The company was created by CK Woo who had a goal of making a company where you get a luxury watch for an accessible price by delivering the best quality watches at a radically fair price. The company itself is based in Singapore, but also in Zurich and Vienna. Aries Gold is now an international brand sold in 28 countries (including USA, Australia, Germany) which was very hard to achieve goal for the only true Made In Singapore brand. The brand had big success when they collaborated with music bands like Foo Fighters and Aerosmith, but now it looks they are going for movies as we are reviewing the Rocky Invincible – Limited Edition watch today. 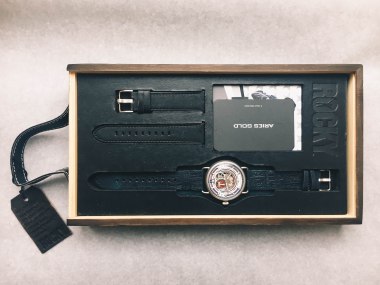 The watch arrived in a very nice wooden box with a nice ROCKY laser engraving with the famous Rocky pose with hands up. On the side, you have a nice leather strap to hold the box and besides that, we have a leather card with a famous quote from the movie “It ain’t about how hard you hit. It’s about how hard you can get hit and keep moving forward”. You slide off the lid and boy, you get a lot of stuff with the watch. The unboxing experience is on the level! Inside you will find a watch on a nice horween bund leather strap with embossed Rocky logo and quotes. Also with the watch, you will get another horween leather strap. Also, you will get a warranty card and as this is a limited edition you will get a card where it says which numbered edition you got from 1000 watches. This is actually fully licensed product by the Metro Goldyn Mayer studios who own the right to all Rocky movies (that is engraved on the case back of the watch), so you know you are getting a real thing! 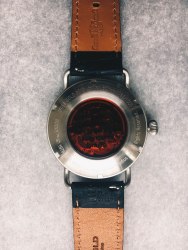 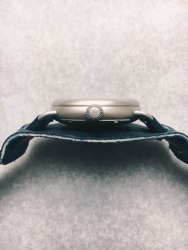 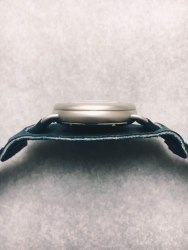 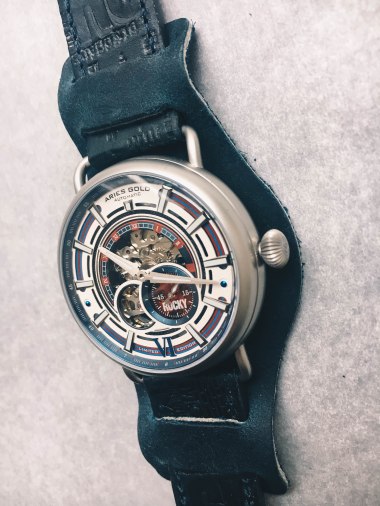 The case of the watch is made of 316L stainless steel. The machine work is pretty well done, all the lines and angles are perfect and sharp. The design of the case is kind of kept in a vintage style with that round, rounded edge case and those wire lugs, but with a modern twist like the finishing of the case as the whole case except case back is bead blasted and has this matte silver finish which looks pretty cool. The case diameter is 43,8mm, the case thickness is 13,5mm and from lug to lug it measures at 50,8mm. It sounds big on the paper, but it actually wears a lot smaller due to those small wire lugs. On the wrist, it feels more like 41mm or 42mm max. On the right side, we have a nice signed onion shaped crown. The crown has a very nice grip and it is very easy to pull it out to set time. The screw in exhibition case back is a pretty interesting one as the crystal through which you can see the movement is bright red and has the same famous quote from the movie printed on it. On the case back you will also find some specifications, sign that it is an MGM licensed watch and the limited edition number. Mine example is 162 from 1000 watches. The crystal on the front is a domed sapphire and on the back, we have a flat sapphire glass. The water resistance is 5ATM (50M). I wouldn’t recommend going swimming with it as it has only a push-pull crown, but it can surely withstand rain, handwash, accidental drop in the water or something like that. 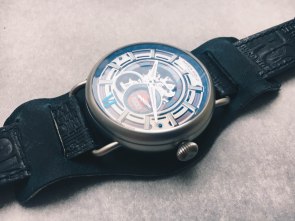 The dial on the watch is really simple in a way that it shows only time, but there are a lot of details, colours and depth to it. The dial has frosted silver colour, red, blue and white colours. The dial itself is skeletonized with a separate window for the open hearth. The small second’s dial is red and you can see through it the movement. On that dial, we have “Rocky” written in white colour. Around the dial, we have a blue chapter ring with a minute track. The top layer is in frosted silver colour. Under that, we have a second layer which is see-through and have lines going around the dial in red and blue colours. The applied stick hour markers are in polished silver colour with white inside where the lume is applied. At 6 o’clock we have one Roman numeral VI for hour marker which is blued. Around the skeletonized part, we have a blue and red half ring on which you have small Roman numerals printed as hour markers. And at 12 o’clock we have the Aries Gold logo. Yes, the dial is busy and it isn’t a functional one in my opinion and for some, it maybe feels like a messy design, but I think it looks cool. Yes, there are strange things like that one Roman numeral as hour market at 6 o’clock (Maybe it has something to do with Rocky movies as there are only 6 parts?) or those super small roman numerals around the skeletonized part, but all together it somehow works. 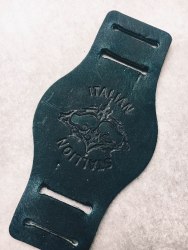 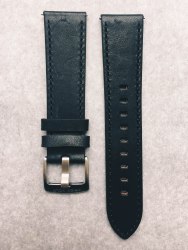 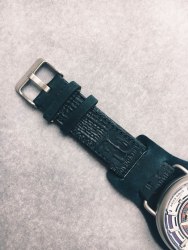 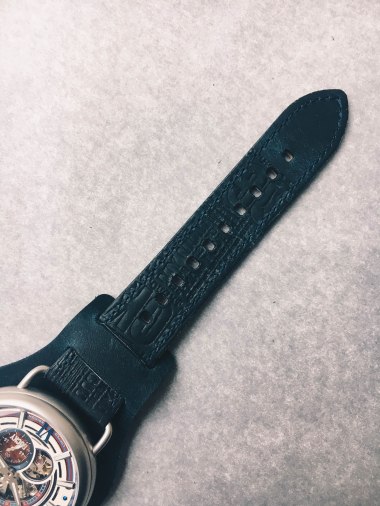 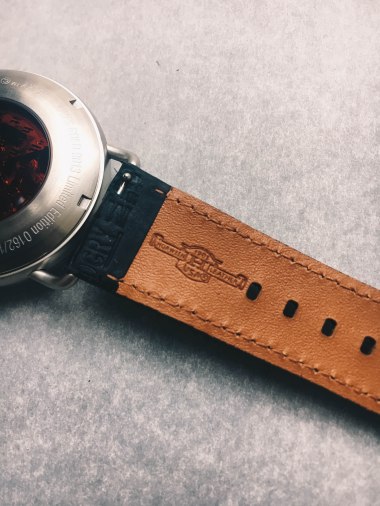 The movement powering this watch is the Japan Made Miyota 8N40 which is an automatic movement which is skeletonized right out of the factory. It beats at 21600 vibrations per hour and it has 42-hour reserve. The big downside for this movement probably is that it isn’t hackable, but I don’t care about that, but I know there are guys who need this function. Precision wise it is pretty good, my example was running at +12 to +13 seconds per day, which isn’t that bad. The movement is pretty good and you can’t go wrong with a Japan made workhorse movement as they reliable and super easy to service, regulate and even if it breaks, you can replace one for 60$ or even cheaper.

The strap that was on the watch right out of the box surprisingly was hand made and from black horween leather with embossed Rocky logos and quotes with a bund on which you have an “Italian Stallion” writing. The leather is super soft and supple. I really like the bund style strap as on the wrist it feels super comfy throughout the day, but the only downside for some maybe will be that it sits a bit higher on the wrist. The signed tang-style buckle is made of stainless steel and has a brushed finishing. The other strap was also a hand made black horween leather strap, but this time with no embossing, just a clean style and with the same tang style buckle. Each strap is fitted with quick release spring bars so swapping in between straps will be in a matter of seconds. I must say, these are one of the best straps that I have seen on a watch right from the box. So I highly suggest you consider buying straps from them if you need a new strap for any of your watches as they really are top quality ones.

Overall this is probably the one watch that has surprised me a lot. The quality, design and packaging are just done right! I really like the vintage design of the case, I always love a good onion crown. The quality of machine work and finishing is done really good! The dial is cool looking and I really like all those layers and that case back crystal that is in red colour is just cool. And of course, it being limited edition Rocky movie watch it immediately gets a smile from me! The price, in my opinion, is really good as you get a well-built watch, sapphire glass on both sides, automatic movement, two amazing horween leather straps, 3-year warranty and super unboxing experience plus you can use the cool wooden box as a display item as it looks cool on its own and all that for 489$! Would I recommend it? Well, I think it mostly depends on if you like skeleton watches with interesting designs or you are a Rocky movies fan.