Today we are gonna take a look at a watch from a company that I wanted to check out for ages! It is called Obris Morgan! They are a small brand located in Hong Kong. I have tried to get Obris for so long, I tried to buy any watch from their website, tried secondary market and anything, but the problem is that the watches they make are so good that when they release a new watch, their all stock is sold out in the first day! And people love this brand so much that they don’t sell any of their Obris Morgan watches! On microbrand FB groups, there was one question on which watches you should own to be a super fan of microbrands and many said that Obris Morgan is one of the brands!

I actually finally contacted this company last year and they agreed to send me one of their newest models and you seriously need to book this a year prior, even before the watch is released. And so 2 months ago they released their newest 60s inspired diver called Sea-Star! And they sent me one in for review. The Sea Star is available in many colour combos, but I chose the simple black dial with no extra colours, I just went simple! Before I start the review I must say that I spent a whole two months with the watch and it has been everywhere from sea to mud, so I have tested it fully!

The Sea Star came in orange plastic Pelican style case which is a really cool touch and it is water-resistant! The box has a sticker on it with the Sea Star photo and name. When I opened the box I was just expecting a watch and warranty card, but inside you get a lot. Of course, you get a watch on this black rubber strap which is a pretty good strap if you ask me, then you get a second shark mesh bracelet which is also top-notch, spring bar tool, extra spring bars, warranty card and movement accuracy card. Obris Morgan just went all out on packaging and I actually don’t know how they could manage to sell this watch for just 349$ as I think it should be 600$ at least, but I guess that is why microbrands are so popular these days as the specs are much higher than the price, and people who can’t afford to spend a lot of money on watches can buy a relatively cheap alternative! 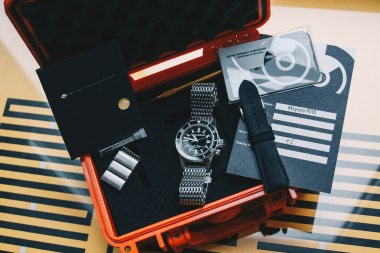 The first impressions of the watch were good. I was really surprised by how thin it is at just 12mm and it has the Miyota automatic movement. Usually watches with these movements from micro brands are bulky and now I see that with this watch and watches from Sternglas it is possible to make them thinner and sleeker! I don’t get it why many brands don’t do that, I think the trend of smaller watches (38-40mm) is really coming back as most of the newer watches are smaller and vintage-inspired. Anycase I was really impressed when I held it in my hands for the first time! 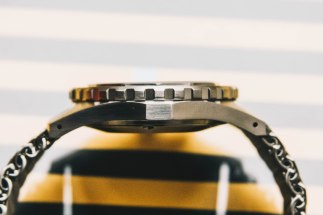 The Sea Star case is made of 316L stainless steel. The case is very well manufactured with nice sharp lines and edges! It has that typical Obris Morgan shape which they have been using in the last watches and it looks like they found their design language as immediately people who are into microbrands can tell what watch is that! The finishing on the case is all satin-brushed, the finishing is done really good and can’t see any defects there! The case diameter is 40mm, the thickness of the watch depends if you choose a double dome (12mm) or flat sapphire (11,2mm), from lug to lug it measures at 50mm and the lug width is 20mm. I really like how this watch wears, it isn’t too small or too big, it is just perfect in my opinion. The first thing that I immediately noticed was the drilled lugs which helpt changing straps a lot! At 3 o’clock we have a pretty big screw-down crown which is deeply engraved on top with “S” of Sea Star! The crown is very easy to grip due to the gear-like teeth and the crown action is very smooth! At around 3:50 o’clock we have a manual helium escape valve with the “HE” for helium engraved on top. Some of the reviews and people said that the valve is too big, but in my opinion, it is well proportioned and I like the position of it too! On top of the case, we have a 120 click uni-directional bezel with a ceramic insert which has a Swiss Super-Luminova BGW9 on all the markings! The bezel at first was really hard to turn, but you just turn it a couple of times and it gets smoother and easier to turn. The action for the bezel is probably one of the best I’ve seen so far, I guess my Ginault has found a great competitor! The bezel is very solid, has no play at all and everything lines up perfectly with the dial markings. The solid screw-in case back is kept pretty simple with a star engraved on it which kind of reminds me of some old Soviet watches for some reason. On the back you will also find that it says anti-magnetic up to 4,800 A/m which is a cool feature and throwback when a lot of companies put the “anti-magnetic” “dust resistant “or “shock absorber” on their dials and case back, which right now has changed as most of the watches released now have all those things. The water resistance is 200M (or 660 feet), it actually would be cool if it said 666 feet, I just think it would be a nice touch! 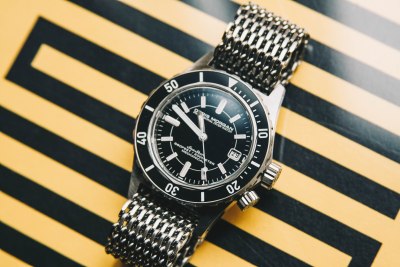 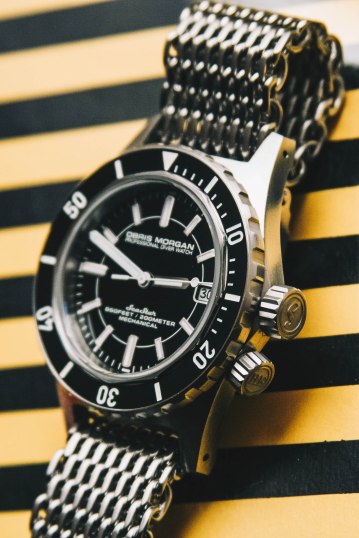 The dial is very appealing, Obris Morgan has made different dial variation to choose from (13 in total), for this review I chose the black dial, the simplest they have. You can choose the colours of the dial, the type of glass (convex, flat), colours of hands, etc. At the 12 o’clock marker, you’ll find the Obris Morgan name imprinted and at 6 o’clock is the name of the model – Seastar, the water-resistant metering (200 meters) and the type of movement written, also at 3 o’clock is the date function. Personally, l would have preferred a no-date version to appreciate the beauty of this dial, but this does not take away from the overall beauty of the Seastar. The hands and markers of the Seastar are filled with Super-LumiNova BGW9. The lume on the Seastar is quite impressive but gets weaker after a few minutes of exposure, but in general, it lasts 3-4 hours which is pretty good. The dial itself is very legible, you can see everything clearly at just a glance! 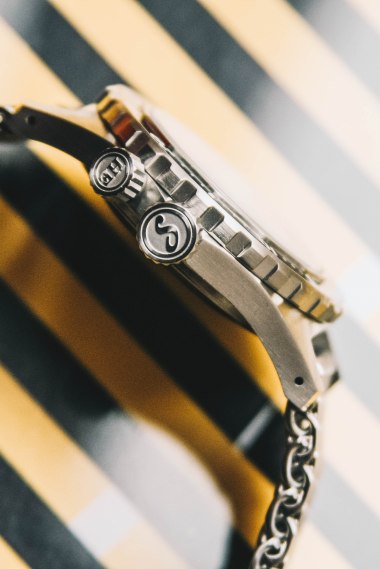 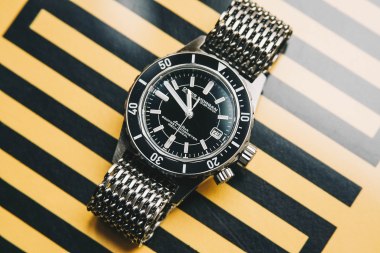 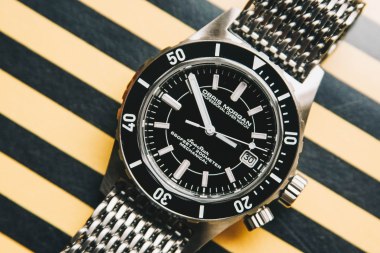 The watch is powered by well known Miyota 9015. This is one of the better, widely available Japanese mechanisms. It beats at 28800 beats per hour. It is often compared to the ETA 2824-2 movement, and by some referred to as better, due to the lower height of the Miyota and a longer power reserve – 42h (ETA – 38h). The movement is well adjusted right out of the factory, Obris claimed that mine example is running at +5sec a day, and when I check it was actually running at just +4sec a day which is really amazing for a watch that costs under 400$. It undergoes control and is regulated during assembly in a case which is really impressive for a microbrand and not even talking about big companies. Usually, microbrands don’t even bother by touching the movement, just drop it in the case and send it out to the customer! 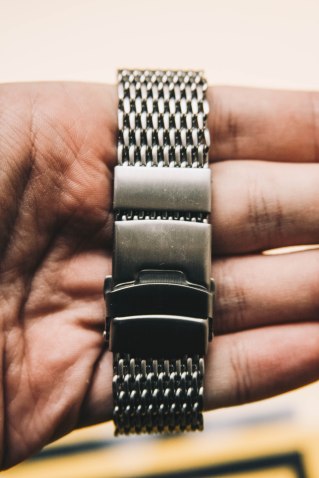 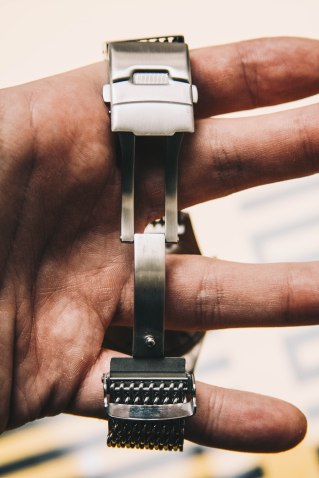 In the box, you will get a shark mesh bracelet and a rubber strap, the finishing of which reminds an old, rotten rubber. Of course, the treatment was intentional and boosts the vintage vibe in this model even more. While the rubber strap is pretty good and wears very comfortably, I was actually looking forward to that shark mesh as I’m a bracelet freak and it went on the watch right when I unboxed it, so we will concentrate more on that. This is probably the best shark mesh bracelet I have seen and experienced on all the watches I have ever had or had in for a review. It is light, well built, a ton of adjustment, removable spare links, milled clasp and the bracelet is very light which in my opinion is a good thing! On the wrist it wears really good, I usually tend to not wear the mesh bracelets as my hands are very “hairy” and they tend to pull hairs, but this one doesn’t do it. The watch wears really well on this bracelet, on the wrist, it feels comfortable and sometimes I even forget that I have a watch on my wrist because it is so light!

In summary, I think it is the best diver of 2019 from all microbrands, I can say that without a doubt! I think maybe the closest competitor is the Baltic Aquacaphe, but that will be in for review later this year. It has everything from a great price and specs. The thing that also shows why Obris Morgan makes only the best watches is that they sell out on the first day. I bet you can’t name many microbrands or even big brands that sell out the whole collection on the first day! If you have a chance to get this watch or any other Obris Morgan model, I highly suggest you snag it! Amazing watch and Amazing Company!