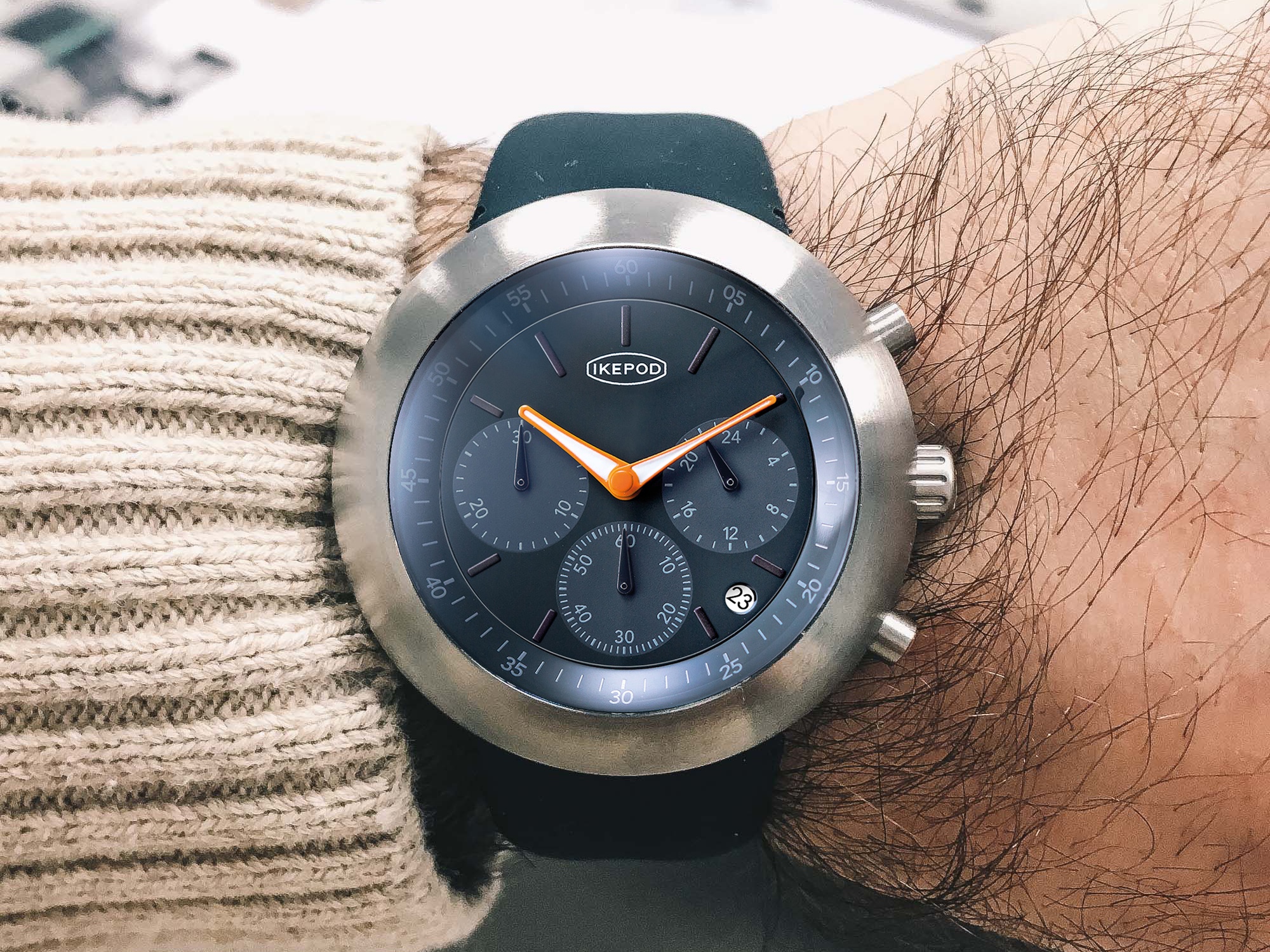 Today we are gonna talk about a brand that has been always a close to me, The Ikepod. My father owned the Hemipode when I was small and I always remember him telling me about the UFO design and the designer Marc Newson, I was mesmerized by the simplistic, yet busy and functional design.

I will tell a short story about Ikepod so you get why it is the rebirth of the brand. The Ikepod is a Swiss watch company founded in 1994 by Oliver Ike and Marc Newson and famous for its cult disc-shaped design watches. The Ikepods were among the first watches to start the wave of big diameter design watches in the millennial years with cases in gold, silver, steel, platinum and titanium and exclusive limited edition watch conceptions bordering on the limits of art.

Newson and Ike have since left the company and the brand was bought in April 2017 by three new investors in Mauborget Switzerland. The new CEO, Christian-Louis Col, has announced that the new Ikepods have maintained the original design elements but have overcome the technical complications of the original Ikepod cases. Furthermore, the Ikepods will no longer be produced in Switzerland but in Hong Kong with Japanese Miyota quartz movements to make them more affordable.

The new Ikepods were designed in Switzerland by Emmanuel Gueit, the Swiss watch designer responsible for the Audemars Piguet Royal Oak Offshore. Some of you may ask why they aren’t designed by Marc Newson? Well, he doesn’t want to be involved with brand Ikepod as in general. The new Ikepods include a time-only 42mm watch called the Duopod and automatic Megapod, and a chronograph model in a 44mm case called the Chronopod. The new models are based on the original Ikepod Horizon and Hemipode models. The new Ikepods feature the same elliptic forms, cases in 316L steel and the original silicone hypoallergenic straps. The company states that its Duopods and Chronopods wear more like 39mm and 41mm watches because of the lack of external lugs and the way the case tapers at the edges. Ikepod relaunched on Kickstarter on 18 September 2018.

So I contacted Ikepod and they sent me the Chronopod Hey Joe model 014 which is a chronograph. They also have 6 other colourways that you can check on their website. I chose this one because it was the closest in design to my fathers watch with the grey dial and orange hands.

The Chronopod came in a rectangular recycled cardboard box. Inside the box, you will find an instructions manual and warranty. Mine also came with a personal card from Christian-Louis Col, thanks, Christian 🙂 I really enjoyed the watch a lot! The first impressions were great! I felt as I travelled back in time when my father bought his Hemipode and unboxed it with me together, of course, that was a luxury watch and this is in the affordable range, but still, it has that wow factor! In my opinion, it is cool that a company can bring it’s higher-end designs to an affordable level. The first thing that I noticed that despite the big 44mm diameter, it actually looks smaller, like a 42mm watch. And also I noticed the weight, it has a very substantial weight to it, it is heavier than some of my 42mm divers. But it isn’t a bad thing, at least not for me as I like heavier watches.

The case of the Chronopod is made of 316L stainless steel. The case has that distinctive “UFO” shape that Ikepod’s have. The lugs are integrated into the case. The case is finished in a satin-brushed finish. I actually always thought why they haven’t done a polished version, I know it wouldn’t be practical as it would scratch easily, but in my opinion, it would be a great idea for a more dressier version of Ikepod, haha. The case diameter is 44mm and the thickness is 16mm, although it feels slimmer due to the round shape of the case back. The case in my opinion is very well manufactured, I have seen the original cases and this is just as good. The problem with the old cases was that the movement and everything goes out from the top of the case, and that meant it was very hard to service the watch and so there are only a couple of watch services specializing in the Ikepod service. But this time to make the service simple and to keep the manufacturing process easier and a little more affordable they chose to go with screw-in case back. At 3 o’clock we have a signed push-pull crown with the Kiwi bird logo on top. The crown is very easy to grip and manipulate. At 2 and 4 o’clock we have chronograph pushers with orange accents on top of them. The pushers are very well made and they have that mechanical “clicking” that I like. On top of the watch, you will find a domed sapphire crystal which is really thick. The water-resistance of the Chronopod is 5ATM (50M) which is the standard for these type of chronographs. That means no swimming with the watch!

The dial I chose is a dark grey colour although on their website the watch looks like it has more of a blue dial. The dial is very shiny and it was very hard to photograph the watch as the dial reflects a lot of light. Around the dial, we have a chapter ring with a minute track in light grey colour. The subdials are also printed in the same light grey colour. The watch has kind of a “ghost” dial as it is hard to see what are the subdial hands showing as they are black and polished and when you look at them they blend in with the dial colour and it is hard to see. The applied hour “stick” markers are black and also polished. At 4:30 we have a round date window with white date wheel which kind of works with the dial. At 12 o’clock we have the Ikepod logo in white which looks really good and crisp. The hour and minute hands are bright orange as Ikepod should have! I really like when a watch company has some fun colours or colour accents and here it fits in very good with the overall design idea. The hands have that famous Ikepod shape with the white middle portion. Overall the dial is legible if you want to find out the time, but when you want to use the chronograph function, it is hard to see. The hands have some lume on them, but it isn’t that great as it lasts maybe 30min to 1hour when fully charged.

The movement that they chose is the Miyota JS 25 Quartz Chronograph « two hands » no running seconds. Which I encounter for the first time. But from what I was reading on the forums it is again a widely used movement in watches up to 700$. Of course, I better would prefer the Seiko meca-quartz movement or maybe even the Miyota/Seiko automatic chronograph movement or maybe a Sellita chronograph movement and make an automatic version too. The battery life is about 2-3 years.

The strap sadly lacks the famous locking mechanism that now is used in the apple watch straps, but I guess that was made to make the watch a bit more affordable or maybe the patent problems. Anycase I think the new owners of Ikepod did great with the straps. I really like a good rubber strap and this one is a good one. The strap that mine came with is black and very soft to the touch and non-allergic. The buckle is very simple and finished in the same brushed satin finish as the case. I would prefer actually the old style of securing the watch on the wrist, but this one works well too.

Overall I really like the watch, I spent more than one month with it and it really brought back some memories with my father and my childhood. The price of this one is 690euros which is a lot as you can get a lot of good watches for the same money with mechanical movements and all that. But in my opinion, the price is reasonable considering the quality of materials and finishing. If you are a fan of Ikepod or maybe you own the originals or you are just a design freak, then this is the watch for you! And in my opinion, the Ikepod design is timeless, it still looks like it was designed yesterday, despite it being an early 90s design. I’m very thankful to Christian-Louis Col for giving a chance to look into the Ikepods new chapter!