I really like diver watches, but many look the same and seem’s that in the diver watch there isn’t anything new happening, at least at the under 1000$ watch range. Substyle, cushion case and even cases like the Oris TT1 and Aquis are the more traditional. Minus 8 is a brand that likes to deviate a little from the norm, and with that comes the Minus 8 Diver, the first dive watch from the California-based company. Being forthcoming, I do prefer the traditional, but that does not mean I do not appreciate when a company goes outside the box a bit. The Minus 8 Diver was a crowd funded project. They got $145,619 USD total funds raised, that’s 173% funded on December 3, 2016.

So the watch arrived pretty fast. It took about 5days to get from the USA to Latvia. The box was surprisingly small for such a big watch. You open the box and it’s just straight down to business. There’s the watch and a small instructions guide for the watch. The first thing that I noticed was the quite loose bezel. The bezel on dive watches is one of the most important things to look for. And as this is so loose, it could turn with the lightest hand touch. It really was a bummer to discover something like that on such and expensive watch. I know that the watch is something new and the company is just a couple of years old, but I have watches that are 500$ cheaper with better bezel action like this has. Ok, maybe that was a bit harsh, but we are here to speak truth. I only give honest reviews and opinions. The watch despite bad bezel action is amazing. The titanium case and bracelet is really light for such a big watch. I have watches that are smaller than this and weighs more than the Minus 8 Diver.

The case is similar to others used by Minus 8, though this one might be a tad thicker than their non-divers. The crown is very much the same as other models as well, though they added a plate on the side of the crown that also gives some specs, which is something I feel could have been left off. I am not sure if this plate is for aesthetics or is functional in some way, like giving some protection to the crown. The case and bracelet both have a bead blasted titanium finish, which Minus 8 refers to as titanium PVD. Personally, a brushed titanium would have been better, as marks and scratches can be buffed out, whereas if you wear this watch hard, it is going to show every mark. Titanium overall is very scratch attracted metal. I like the lightness and dark gray color, but the scratches is what scares me, plus it’s pvd coated. So if you use the watch hard, the scratches will be visible.  The diameter of the case is 44m, thickness is 14,3mm, case lenght is 53mm and lug width is 22mm.  Water resistance is 30ATM or 300M, which is a lot and more than enough for regular use to go swimming or showering. I really will be enjoying this watch as a swimming watch in the summer. 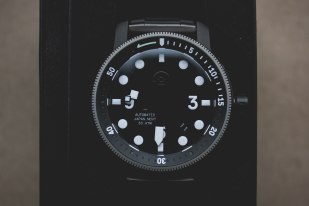 On 9 o’clock, on the case you will find which seems to be a helium escape valve. The sapphire crystal is pretty basic, altought I would preffer some dome action going on. For me, the dial is the standout here.  Matte black with over sized markers and hands make it super legible, something a dive watch should be. It kind of reminds me Oris aquis or Sinn dials, with those blocky hands. and overall design. The lume is okish, but it isn’t long lasting. 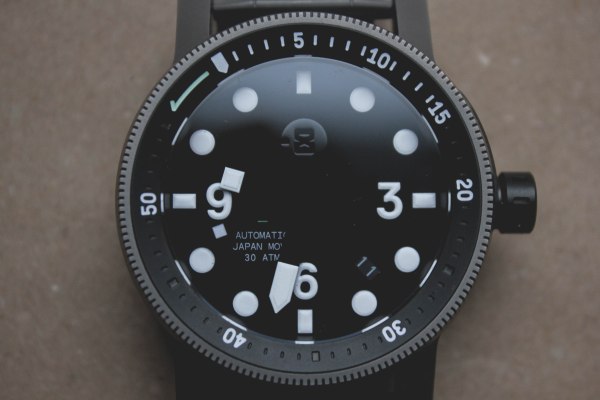 The bezel action is bad for me, it can be turned with one finger, yet there is no play, or slop in the bezel either. To the best of my knowledge, the bezel insert is PVD coated steel, though it can be a matte aluminum insert as well. Since this is being marketed as a true dive watch, they claim all of the Minus 8 Diver watches are pressure tested before leaving the factory. Of course I can not verify that claim, but in the shower it proved to hold up just fine. My real concern of it being used as true dive watch in the ocean would lead back to the crown for me, and no protection for it (no crownguards). The crown is solid and does feel secure when you screw down into the case. 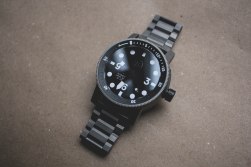 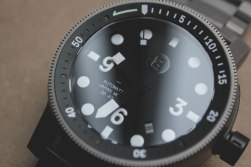 The movement is a trusted automatic movement with a 55 hour power reserve, the Seiko NE15/6R15. A pretty reliable and widely used movement in microbrand world. The MKII, Dagaz, Hexa and many other dive watch brands use it. Seiko movement have proven they’re reliability during these years. Never had a problem with any of them. 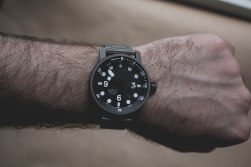 The bracelet is nice, but I really would’ve liked solid endlinks, but on the second thought the watch would wear a lot bigger. I think they did this because they wanted to make a big watch that people with smaller wrists could wear it, and it would wear smaller than it is. I tried on couple of natos and it works very good. Definitely a watch that is nato-friendly. The buckle was pretty good too. 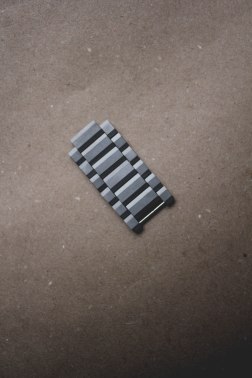 Overall the watch is nice, I like the looks. It’s something new. Ofcourse the bezel action is a downside, but as you never will dive or even use the bezel it doesn’t matter. It is all titanium after all, has a great Seiko automatic movement, a well constructed case and bracelet, and a sapphire crystal. It is marketed as being a tool diver, but at the $788 price tag. With the dive watch market being so crowded, I will say the Minus 8 Diver is not your average looking dive watch and for some enthusiasts that is what will draw them to it. Let’s face it, many who buy dive watches don’t actually dive, so if you want something a little different, lightweight and with a trusted movement, the Minus 8 Diver might be worth the look. 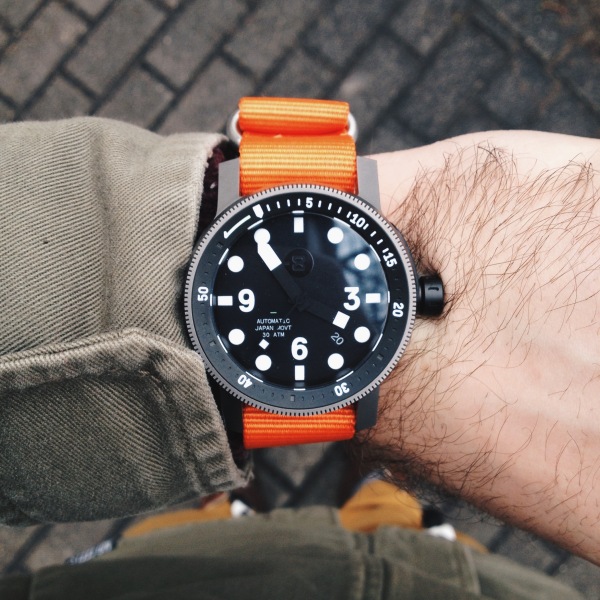 One thought on “Minus 8 Diver Titanium (Review)”