I always was sceptical about minimal wallets that have no compartment for the coins. All my wallets were big, I didn’t like it, but I kind of always went with them. But I wanted to try out them now, as they were everywhere, I saw ads on facebook, eBay and Instagram. Seems like they reached their peak moment. So I wrote to Minimum Squared as they were pretty praised on the internet and they sent me some samples to try out. Here is some story behind the company:

The company officially started a couple of years ago, but the seed of it goes back around 5 years ago when Founder got a job in an engineering firm that required often travelling by plane. When on a plane he liked to carry 4 essentials in the 2 front pockets (a small mp3, passport, wallet and phone) and those essentials should stay comfortable during the length of the flight…phone and passport there’s not much choice regarding size, but for a wallet there is.
The problem with the smallest wallets, also called minimalist wallets is that they are basically cardholders with a fancy name, which is ok for most of the time. The thing is, for some reason he had some kind of a trauma with paying in queues, from his time living in Germany and England he recalls the stress that supposed for him searching for cash to pay in supermarket queues, there seems to be a pressure for speed that he has not lived in any other country, so from that time he wanted a wallet that had an easy access to cash, that meant not folded money pressed in a pocket that has to be extracted, unfolded and selected.

There were some choices out there, but none of the designs fulfilled the following basic requirements:

He tried to find a perfect wallet on Internet, but after almost two years looking for a wallet that fulfilled those requirements he gave up and proposed his girlfriend and now wife to help him creating such a wallet. At the beginning, she thought he was crazy and that there were better ways to spend money and the scarce free time he had than developing a tiny wallet…but somehow he persuaded her, and now there they are!
In creating these wallets there were no corners cut. They chose the best material available, like veg tan leather from the UK and the USA and thread from France and Germany. Regarding construction method they used a single leather pattern for the wallets, that is folded and then hand stitched for two reasons. The first is that hand stitch (saddle stitch) is supposed to be more resistant than machine sewing, and the second is that their designs are a bit intricate and cannot be done with a machine sewing.
They also removed the unnecessary linen (its the first thing that gets damaged in a wallet) and let the stacked cards be the ones that give the structure to the wallet, so a thinner leather can be used. With that design philosophy, you get a wallet that has almost the same size empty and filled.
So let’s begin the review. They sent me two wallets. The Slim and Slim Elastic. They both are pretty similar but has their differences. The packaging was as minimal as the wallets. But it was packed really good. There was a small eco cardboard box for each wallet and inside was the wallet wrapped in paper and neatly presented. I really liked the presentation. Truly great!

So let’s start with the black one “The Slim- Horween Black CXL“, that was used quite a lot and is still used daily. The wallet surprisingly fits all my cards inside. As you can see from the pictures the leather is pretty beaten up and this is after 1,5 month of use. But, I like how it looks, I like when the things have their own character and you can see that they are beeing used. The leather I think was beaten up more than usually was because the leather is quite thin, but that was mean for the wallet to be even more minimal to fit more cards. 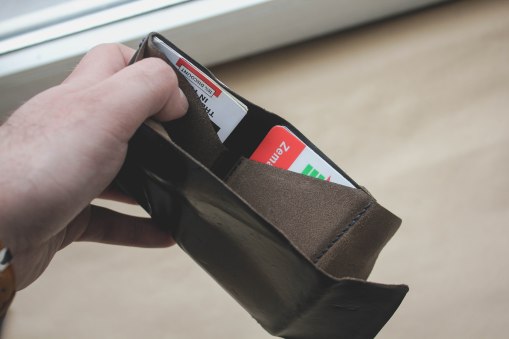 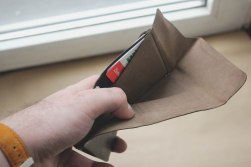 The Slim wallet easy fits all my cards as I said + business cards and money (any euro bill fits good inside). I even had some place left for a couple of my business cards. It holds 10 cards in total, but I think you could squeeze in a couple more. Dimensions are 92x68x15 mm /3.62×2.68×0.59 in (approx.). It has 5 individual compartments: 4 pockets that can hold up to 10 cards + 1 slot where most international currencies fit. The quality of the leather is really good. It’s soft and shaped around the cards very well, just as they promote it. The stitching is very good and seems like it will withstand time without a problem. I really would like to see how it looks after 5 years or more. It could really look good.

Is it priced right you would ask? Well, I think yes. After all, this is a handmade product, made with the best materials available. Plus the wallet is customizable, you can choose stitching colour on this model. So I think that 165€ price tag is really good.

Next one is the Slim Elastic “SWE – Blue Leather – Dark Blue”. Another great slim wallet, but this one from the first impressions seems a little thinner and with an elastic band over it. Also, it is in blue. uite rich colour the leather has. It kind of reminds me some Hermes bag leathers. 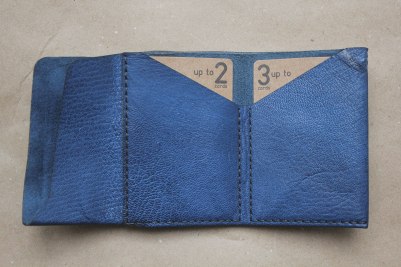 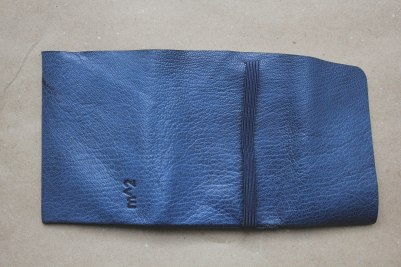 So the wallet is basically the same as the black one. It has the same dimensions 92x65x15 mm /3.6×2.56×0.59 in (approx.). It has the same 5 individual compartments: 4 pockets that can hold up to 10 cards + 1 slot where most international currencies fit.But it has an elastic band to hold everything together, so when the wallet is full, it wouldn’t fold open.

This one has much softer leather and it has a different pattern, a bit rougher. But it feels thinner. This is goats leather. It comes in many colour variations. I kind of liked this one the most, but others look good too. This I didn’t test as much as the black one. The main reason would be that you need to take off the elastic band and that takes more time than just opening the wallet as in the black one’s case.

The Slim elastic costs 150€, so it’s a bit less. But you still get the same quality, but with an elastic band. Some would prefer this version, but I prefer the regular Slim version. I really would like to see this age too, as the blue leather will scuff up and turn darker blue due years of use, and it could look really cool. Do I recommend it? YES! It is worth every cent!

By the way, this wallet design after the first year won a Red Dot Design Award. And in the jury were pretty huge names as Jimmy Choo, Ken Okuyama or Chris Bangle to name a few.