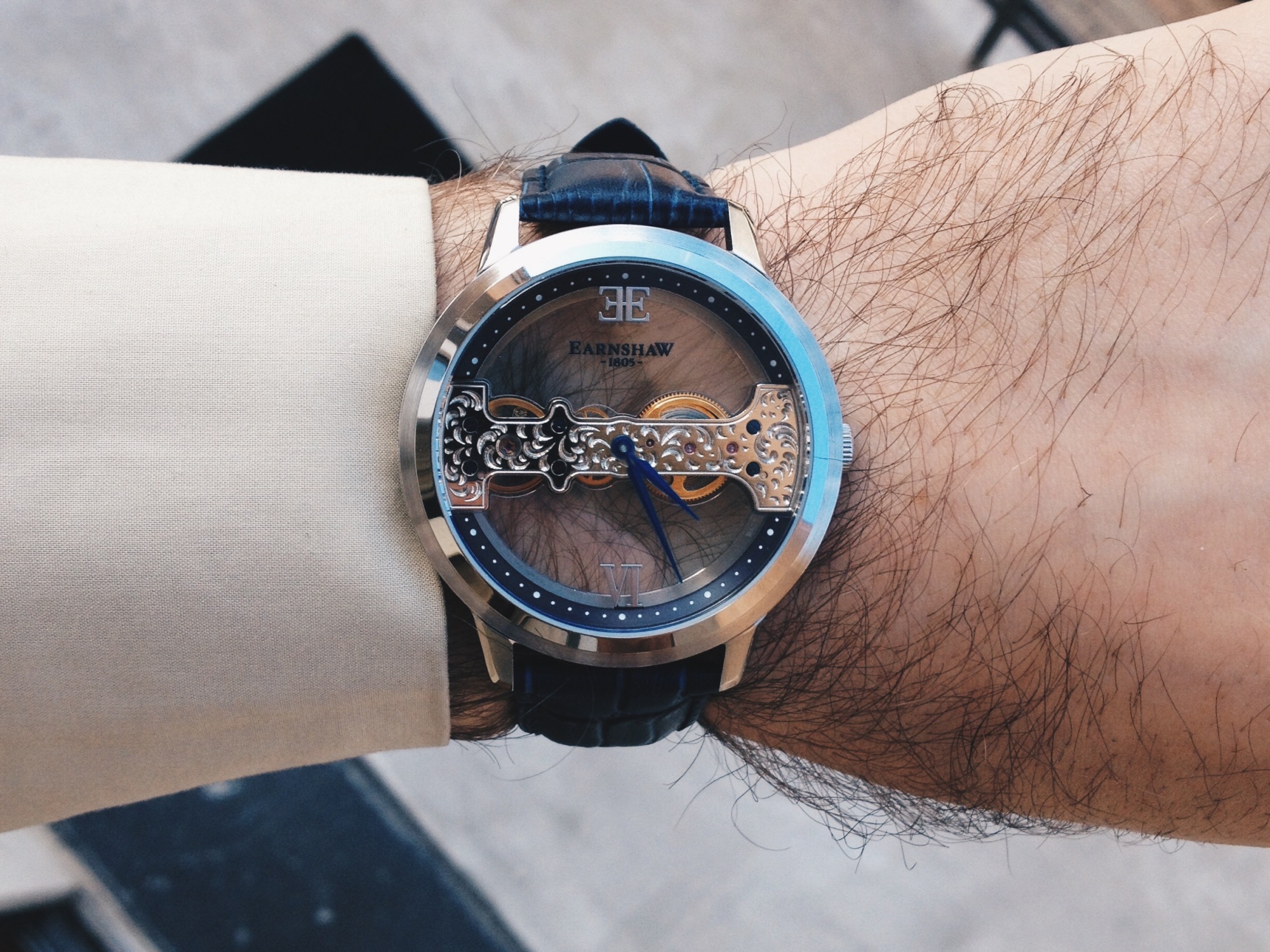 First time when I saw this brand was an Instagram ad. They had a lot of watches in they’re offering, so I wanted to review one of them, and I was just in time for some new releases from the company. When I first saw the ad for the Thomas Earnshaw Cornwall Bridge, I was quite impressed by the looks. It reminded me a watch by Konstantin Chaykin. Also, it was quite interesting to see the bridge watch or such price. As they are used rarely. Of course this movement isn’t any high horology, but still.

History of the company name goes back to the year 1805. Thomas Earnshaw (1749-1829) born on the 4th of February at Ashton under Lyne, Lancashire near Manchester, England. Thomas Earnshaw is revered as a legend and pioneer in the field of Horology. Born in Manchester, England in 1749, he was celebrated for his work in refining, and improving upon the Marine Chronometers of the era. It was those Marine Chronometers, crucial to the journeys taken by the boats in the Royal Navy as they circled the globe during a golden era in English history of science and exploration. None more so than Chronometer no. 506, carried by HMS Beagle which carried Charles Darwin on his journey around the world to inspire his breakthrough study of evolution, “On The Origin of Species”. Lauded for his work with marine chronometers, Earnshaw also embraced the challenge of developing clocks for use in Observatories such as those in Greenwich and Armagh and examples of his exquisite work can be seen in museums and auction houses around the world. It is this pioneering spirit to further the science of horology, coupled with a drive for excellence in craftsmanship that is at the heart of the Earnshaw timepiece which is available for the watch connoisseur and enthusiast alike. He devised a modification to the detached chronometer escapement, and the compensation balance which would be used in the standard marine chronometer thereafter.

To know more about Thomas Earnshaw and more detailed history behind the brand, go to his Wikipedia page.

Ok, back to the review, as you know we are taking a look at Thomas Earnshaw Cornwall Bridge watch. The watch arrived in this good looking box, but only on the first glance. As you can see from the pictures, the lettering is not straight. But the wooden box itself is ok, pretty good looking actually. First impressions were good. Taking the watch in hands you can really see why it costs this much for a Chinese movement watch. The quality of the case and see-through (skeleton) dial looks good. I once had a skeleton watch, I think it was some mid-tier brand. And I really liked that watch, but sadly the watch was completely destroyed after it fell off my wrist while I was riding a bicycle pretty fast. 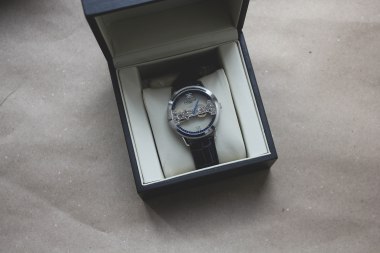 Funny enough the watch is marketed as the “Cornwall Bridge Automatic”. That must have been very embarrassing when the team noticed that, but strangely they still went with this marketing although the watch obviously is hand wound. It even says: “Hand Wound movement” on the case back.

The case is polished stainless steel. Case size is at 42mm in diameter, due to the transparent nature of the watch it doesn’t wear that big. The thickness is 9,5mm which quite thin actually for these type of watches. As is the cases are custom, they have Earnshaw engraved down the side of the case, which is deep and neatly done. The screw-in case back is steel, with a large exhibition window with details surrounding it. I believe mineral crystals have been used on the top and bottom. For a watch costing this much, personally I think they should be no less than sapphire, but I guess there were some problems in that region, so they went with mineral. 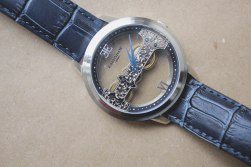 The crown, well… there isn’t any watch in the world that has crown designed so stupidly. It is the worst I ever had in a watch. It’s simply unusable. Of course, it’s a hand wind only watch, which always means you need to wind it every two days at least – but it’s just too small to use. It’s a nightmare getting any sort of grip on it, it’s even difficult to pull out the crown to change time. I just don’t understand how they could’ve missed the watch naming “automatic” + not testing the crown to wind the watch and to set time. It has the double E logo engraved on the end.

About the dial. What can I say? There isn’t any there. The bridge/baguette movement provides a pleasing and unusual backdrop to this timepiece. There is a dial actually, but it’s a transparent disc which the logo is printed on and the applied hour markers at 12 and 6 are connected to. I like how the transparent dial looks, it is a real conversation dial. The applied hour markers are executed very well, accurate and finely finished. There is the double E logo at 12, and 6 in Roman numerals at the base of the dial. 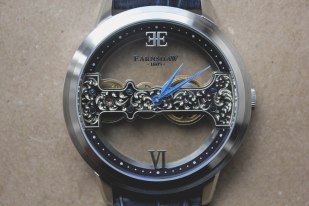 The pitched dauphine hands are blued to match the strap. They have a brushed finish and looks very nice. I have seen on another review, that the golden ones have the problem of reading the time. Because of the golden hands and movement when they’re sitting on top of the movement – such as 9:15. So be aware when you are buying the golden versions. Surrounding this void is an elegant blue rehaut. 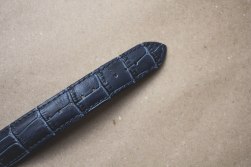 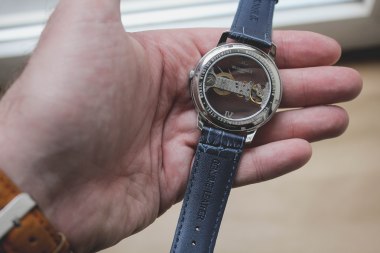 The strap is thin and quite supple. The thinness of it helps it to be very comfortable on the wrist. The strap has a slight flaw  – the buckle. Whilst it looks good as the top bar is in a shape of the E logo, that usually ends up wrecking the centre of the strap due to the strain on it. The brushed top bar has the Earnshaw logo engraved, with polished flanks. The movement powering the Thomas Earnshaw Cornwall Bridge is the PTS JQ-005. It looks good and offers the looks what Earnshaw watches usually go: elegance, luxury etc. Of course, the movement is Chinese made. I know that it doesn’t mean it is bad, as such Chinese manufacturers like sea-gull has really good quality moments. But I read on the internet that these tend to break a lot. But we will see how they survive these years. It has a 36-hour power reserve once fully wound and runs at 21.6k bph.

Overall thoughts, well… I usually am not too critical about watches except the DW, Michael Kors etc. But I think Thomas Earnshaw need to test they’re watches and marketing team on this one. Because there are issues in marketing, the crown and the buckle. Those are just too big points to miss. I like the looks of the watch, and surely could go with the PTS J-005 movement, it just needs some work to make it better. I have reviewed some prototypes that are in the first stage of prototyping that is designed much better than this. Do I think you need to buy the watch? It looks really good, but if you overlook the issues and get a good discount, buy it. Because £380 is a lot for Chinese movement, mineral crystals and unusable crown.