Today we are taking a look at a very affordable pilot’s watch from a company called Aeroluft! I discovered the company through Instagram and really liked the look and how cheap they are! So the company is called Aeroluft and they are based in Spain. The company was founded by Victor Berrondo who is a pilot’s and military watch enthusiast. In 2017 he had an idea of designing and manufacturing quality watches at affordable prices remembering those pilot watches from the golden age of aviation. That means that each watch version is named by famous pilots from the early years of the XXth century, the First World War, the inter-war years, the Second World War, the 50s … and making them not only inspired by the aviators, but also by other types of pilots: the gentlemen drivers pioneering in car racing since the early XXth century years until the 60s, or the crew on board boats or submarines.

Before we check out the watches I have to say that I actually wanted to post this review in August last year (2018), but due to customs losing these watches I couldn’t do it. But almost a half year later the package reappeared in January (2019) and so I was able to finally enjoy the watches and make a review of these two beautiful watches! That just makes an interesting story itself out of this situation! 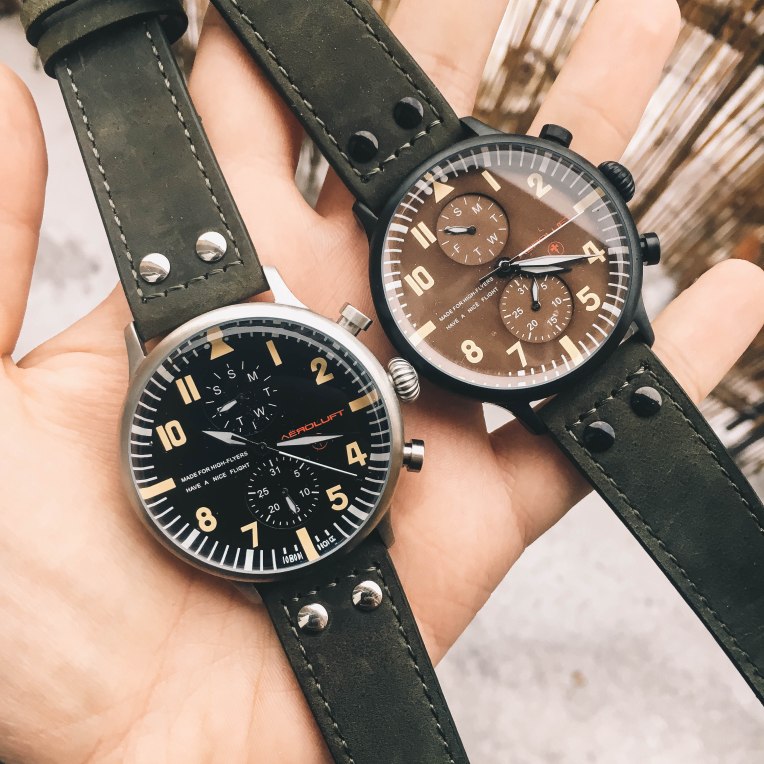 When Victor gave me a chance to chose the watches. I chose the Werner Ross (Black IP coated case and brown dial) and Francesco Baracca (Stainless steel case and black dial).  I just think these two watches looked the best in my opinion and I especially like the brown dial one for sure! They also have versions with silver and blue dials so there is plenty to choose from! The Werner Voss (1897-1917) was a German ace pilot in the WW1 with 48 credited victories. And the Count Francesco Baracca (1888-1918) was Italy’s top fighter ace of World War I. He was credited with 34 aerial victories. His coat of arms was offered to Enzo Ferrari by Baracca’s mother after the war to be used as the Scuderia Ferrari racing cars badge. Ferrari accepted but changed the background colour into yellow for his birthplace (Modena), and the horse colour into black (honouring the pilots who died in the WWI) as well as the tail direction. 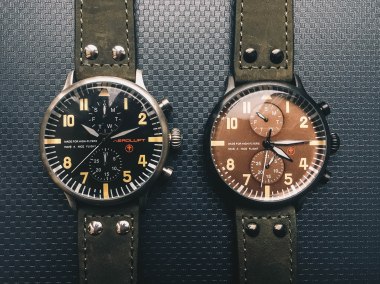 Both of the watches came in small rectangular cardboard boxes, nothing special, everything kept minimal and the main focus is on the watches. The first impressions were that the watch actually feels much more expensive than it is. Each watch costs just 99€ and I just can’t imagine how Victor made this possible as microbrands don’t tend to sell watches for this low. I was really impressed by how they were made and I especially like that domed crystal, and I don’t even care that it is mineral, not sapphire. I also like both of the dials, but that brown is just stunning! 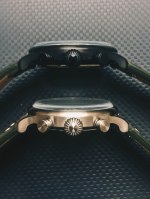 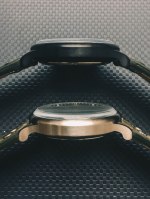 The Aviator watch case is made of 316L stainless steel. The cases are very well machined with nice rounded angles and lines. I really like how the case is styled. The stainless steel version is satin brushed and the black IP coated one has this matte look. Both watches look good. The black IP coating seems very well applied and I doubt that it will rub off over the years. The case diameter is 46mm, the case thickness is 13mm and from lug to lug it measures at 52mm. The watch on paper seems really big, but in reality, it feels much smaller than it is as you can see from the photo of one of them on my wrist. At the right side at 3 o’clock we have an onion-shaped crown which is really easy to use due to the big size! I really like when pilot’s watches have big onion crowns, the watch just looks much better with it. At 2 and 4 o’clock we have pump pushers which are for controlling both subdials. The top one is for the day subdial and the bottom one is for date subdial. The screw in case backs are both finished in circular satin brushing. On the case back you will have an engraving of an old plane, Aeroluft logo and some specifications. On top of the case sits a domed/boxed hardened mineral crystal. Of course, we all could wish for sapphire, but at this price, I don’t mind having mineral. The water resistance is 5ATM (50M), it isn’t a lot, but pilot’s watches usually don’t have big water ratings as they are not meant for swimming, just like this one. Of course rain or handwash it will take with no problems. 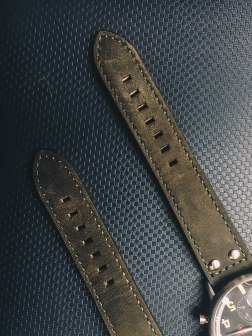 The dial is kept in these old aviation traditions with very bold hour markers and that triangle on top at 12 o’clock. The hour markers have this patina look with that yellow-ish colour which I really like and it goes so well with that brown dial! Around the dial, we have a minute track printed in white colour. At the top, we have a day subdial which is a bit lower than the main dial and on the bottom, we have a date subdial. A bit weird choice as most of these style watches have chronographs and I don’t know much pilot’s watches which have day and date complications. At 9 o’clock we have a text “Made for high flyers, have a nice flight” which is another nice detail to show that Aeroluft is all about the aviation! At 3 o’clock we have the Aeroluft logo in red which gives the watch a little pop of colour on the dial. The Sword style hour and minute hands are in black with white middles. The stick-shaped second’s hand is also in black and white. The Superluminova is applied on hands and hour markers. The lume isn’t the brightest, but it is ok for a watch that just costs 99€.

When it comes to the movement, the Aeroluft is powered by a Seiko VX9P quartz movement. I never had these movements in any of my watches, but you just can’t go wrong with Seiko quartz movements. I have had tons of other Seiko movements and none of them failed. They are basically indestructible and very reliable and precise! The battery life is around 2-3 years.

The pilot’s style green olive tone leather straps are pretty good! At first, they are a bit too stiff, but after a day or two they will wear in nicely. I like this style of strap with the stitching and those two rivets on both sides. The rivets on the black one will be in black to match the case colour. The strap width is 22mm. The tang-style buckle is signed with Aeroluft logo. I like that the buckle is in this Panerai style, although it isn’t going with the Aviation theme as this is more of a Nautical style buckle, but I like it.

Overall Aeroluft Aviator watch is really good! You get a lot of a watch for just 99€! It has great design, it is very well made and solid, nice leather strap and it is functional as a pilot’s watch should be! I really hope that Aeroluft stays in the microbrand market and they will soon make new designs! Can I suggest this watch? YES! Definitely worth buying!